Giving Them the Life they Deserve

Many St Bernards within Europe are used as working dogs and are often crossed with other large breeds – they are sheep protection dogs or guard dogs in some countries such as Romania. In terms of animal welfare, there is no specific legislation making animal abuse an offence.

Another difference is that some countries have no official dog rescue or shelter welfare and some Eastern European countries have what are called ‘killing stations’. An owner can take their dog that they do not want to a killing station. Basically, they wait until the dog is weak and are bludgeoned to death by a blunt instrument normally within 7 days. Quite often, all the dogs in the killing stations are killed in one night.

We believe that all dogs deserve better than that, which is why we work with our European rescue partners. Many dogs that come to us have often been abused by their owners, discarded onto the streets to fend for themselves and most are chained up. Some are starved. We often have less than 5 days in which to rescue the dogs that we are contacted about to fund their removal and move them into a safe shelter.

Giving Them a Chance & Hope

In the UK many people buy St Bernards as they see them as cute puppies however once the dog is around 8 months old, without any adequate training, they often decide that they made the wrong decision and can’t handle the dog so contact us to re-home or sell them on via unregistered sites. Sadly the film Beethoven has done the breed some harm as people do not recognise Beethoven as a very well trained film dog.

Sometimes we are offered pups who have health problems perhaps hip dysplasia or blindness. We take these dogs and offer them the best life that we can with people who are committed to the breed and understand their needs. Due to financial difficulty, divorce, house moves and ill health we are also contacted to deal with emergency rehoming. 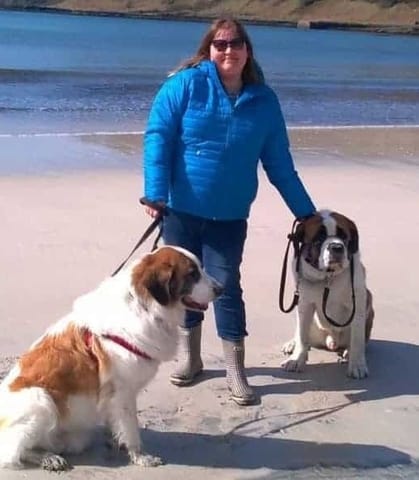 Hi I’m Rachel and I have been the chair/secretary for Saving Saints for the past 3 years. I adopted my first rescue dog Toby as a pup from Bolton Destitute Animal Shelter at 18. He was a cross rottweiler. I am fortunate to share my world with 2 St Bernards and a cross Saint/ Romanian shepherd who is partially sighted (Dotty, Willow and Monty). This photo is of my first St Bernards, Kuba from Romania (who died of bloat) and William a UK rescue (who died of heart failure at age 4) – sadly both common problems in St Bernards. 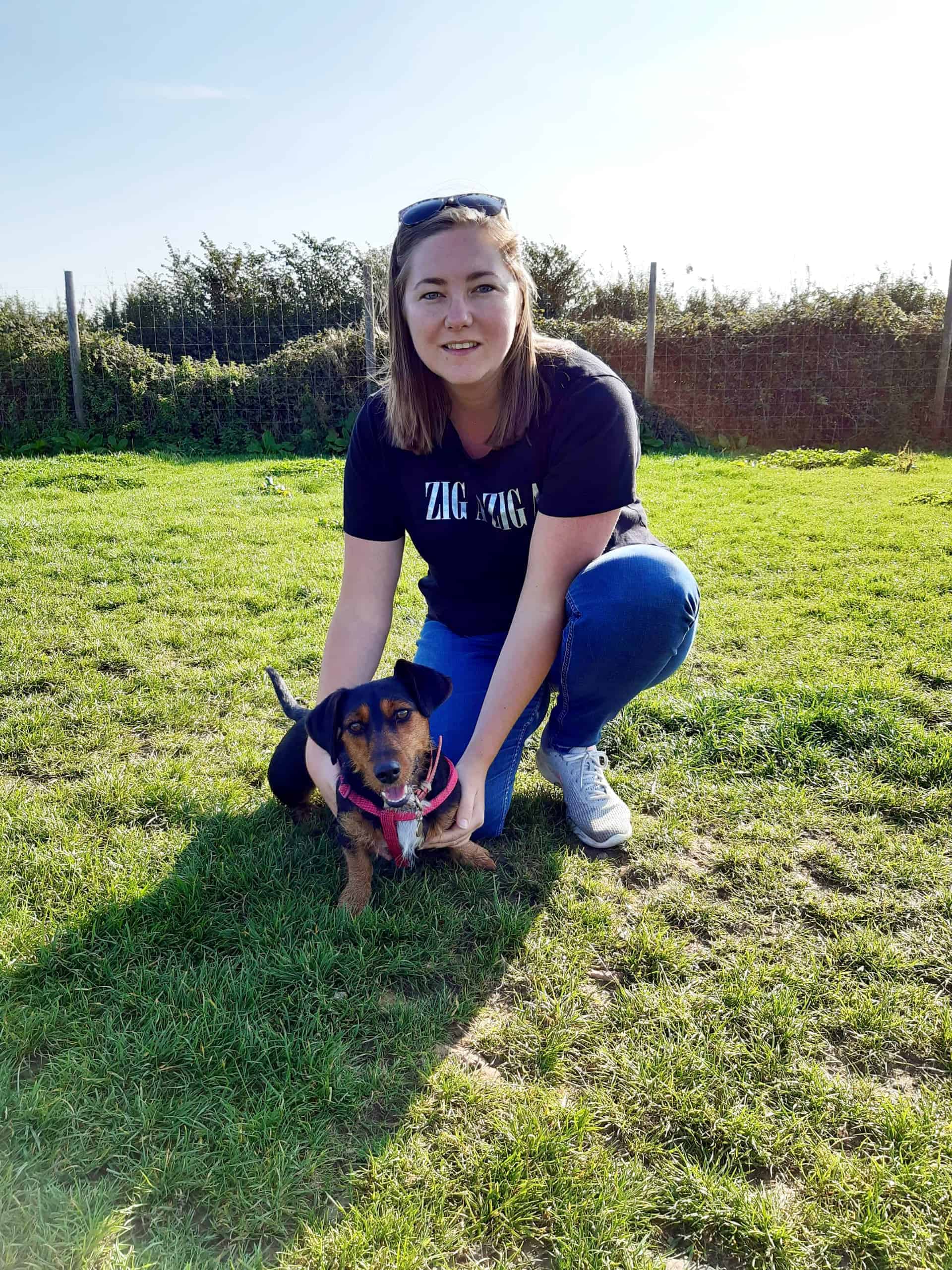 Hi I’m Chantelle, currently a Trustee who works on our fundraising and PR activity for Saving Saints. I found my passion for large breed dogs when my parents adopted one several years ago and couldn’t believe how many were in need! Although I don’t currently have a large breed I do have my adorable dachshund x jack russell who throughly enjoys playing with the big boys & girls. 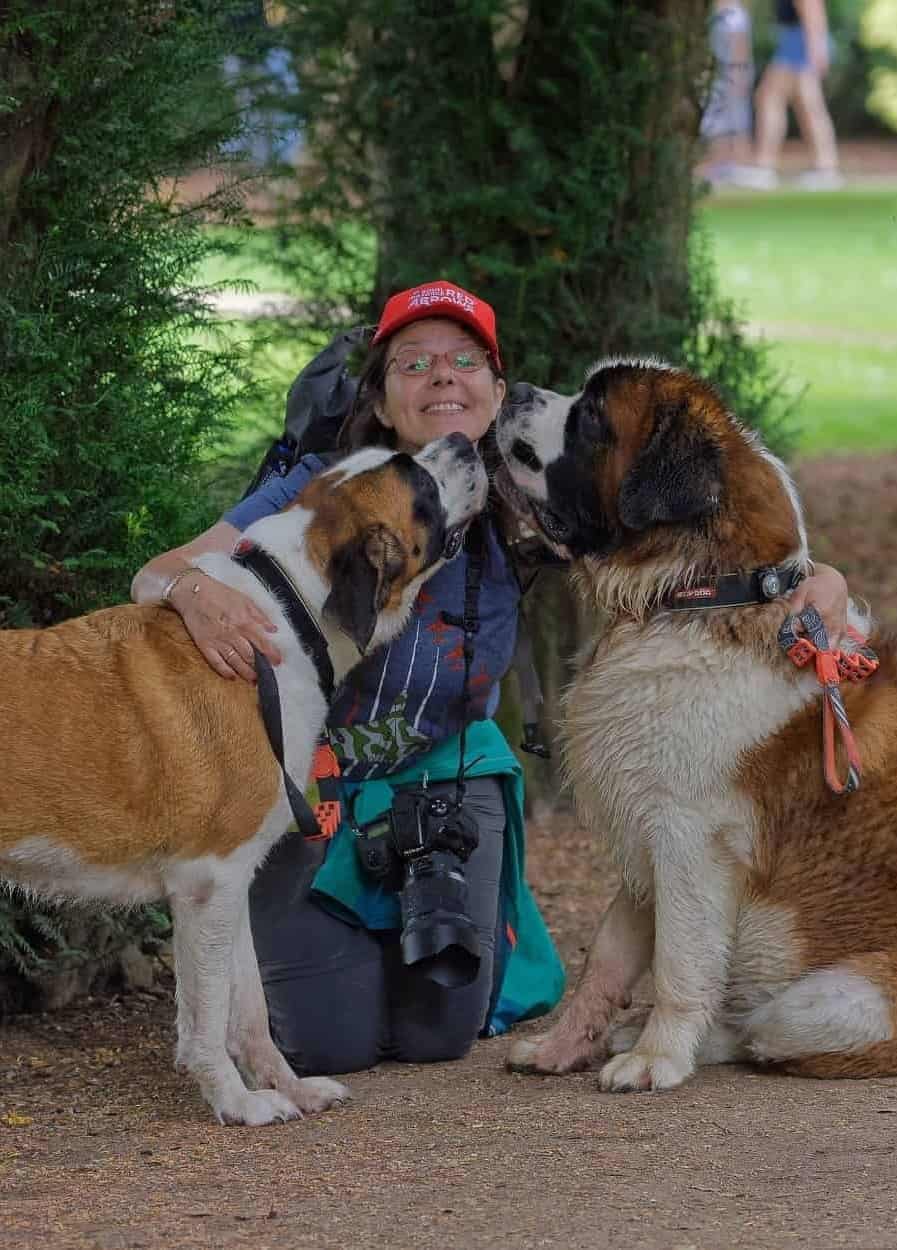 Hello, I am Marina. I am a trustee for Saving Saints, currently helping to co-ordinate adoptions. I have been involved in rescuing companion animals in need since my childhood. At 18 I adopted Rayner, a beautiful mixed breed junior dog, from the Greek Foundation for the Protection of Animals. Rayner and I shared our flat with a number of abandoned dogs over the time we were together. I currently enjoy sharing my life with my five Saint Bernards and eleven beautiful cats.

Hello, I’m Abigail and a trustee for Saving Saints and Big Paws looking after after Instagram and Merchandise. This came about when I realised after rescuing my fifth dog earlier this year a beautiful sweet Saint Bernard from Egypt, that I was rapidly running out of space at home and it was time rethink how I best support a cause very dear to my heart. 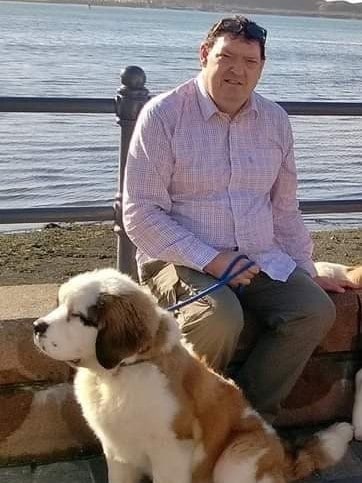 Hi, Im Sam the treasurer for Saving Saints. I’ve worked in banking and finance for over 30 years. My first dog was called Champ, a Cairn Terrier. Willow is one of our St Bernards and here she is as a youngster.

You'll save a life

Each year, it’s estimated that millions of adoptable dogs and cats are euthanized globally.  Often because too many pets come into shelters and too few people consider adoption when looking for a pet.

The number of euthanized animals could be reduced dramatically if more people adopted pets instead of buying them. When you adopt, you save a loving animal by making them part of your family and open up shelter space for another animal who might desperately need it.

You'll get a great dog

Our group and the rescue partners we work with are brimming with happy, healthy pets just waiting for someone to take them home.  Many of our dogs are in need due to a human problem like a move or a divorce, not because the dogs did anything wrong. Many are already house-trained and used to living with families.

When you adopt a pet, the cost vaccinations, flea/worming and microchipping is included in the adoption price, which can save you some of the up front costs of adding a new member to your family. Depending on the dog, you may also save on housetraining expenses and dog classes.

No one needs to see another selfie—unless it’s a selfie of you with the adorable dog you just adopted! Adopt a dog, post those pictures and let the well-earned likes roll in.

If you buy a dog from a ‘breeder’ or online seller you may be getting a dog from a puppy mill without realising it.

Puppy mills are factory-style breeding facilities that put profit above the welfare of dogs. Animals from puppy mills are housed in shockingly poor conditions with improper medical care, and are often very sick and behaviourally troubled as a result. The mums of these puppies are kept in cages to be bred over and over for years, without human companionship and with little hope of ever joining a family. And after they’re no longer profitable, breeding dogs are simply discarded—either killed, abandoned or off for dog baiting.

These puppy mills continue to stay in business through deceptive tactics — their customers are unsuspecting people who shop over the internet or through classified ads. Puppy mills will continue to operate until people stop supporting them. By adopting a pet, you can be certain you aren’t giving them a penny.

Your home will thank you

Many of the pets from shelters and rescues are already house-trained, which means you’re not only saving a dog’s life, you may be saving your rug. Adopting a mature dog not only gives older animals a second chance, it often means introducing them to your family can be much easier.

good for your health

Not only do animals give you unconditional love, but they have been shown to be psychologically, emotionally and physically beneficial to their companions. Caring for a dog can provide a sense of purpose and fulfillment and lessen feelings of loneliness. And when you adopt, you can also feel proud about helping a dog in need!

Overburdened shelters take in millions of stray, abused and lost animals every year, and by adopting an animal, you’re making room for others. Not only are you giving more animals a second chance, but the cost of your adoption goes directly towards helping us and our rescue partners better care for the animals they take in!

we will support you

We support you post-adoption with general dietary and health advice and have specialist behavioural back up for the life time of your dog.

And get a new best friend out of the deal. Rescue dogs know how fortunate they are for a warm bed, regular food and loving company and they give us that love back ten fold.  Seriously, what could be better than that? 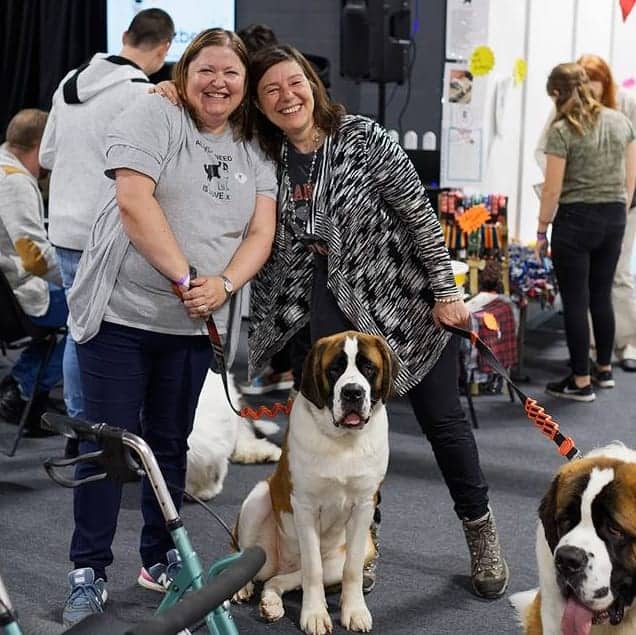 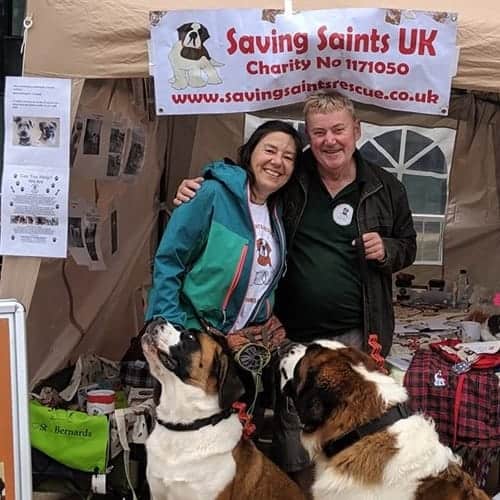 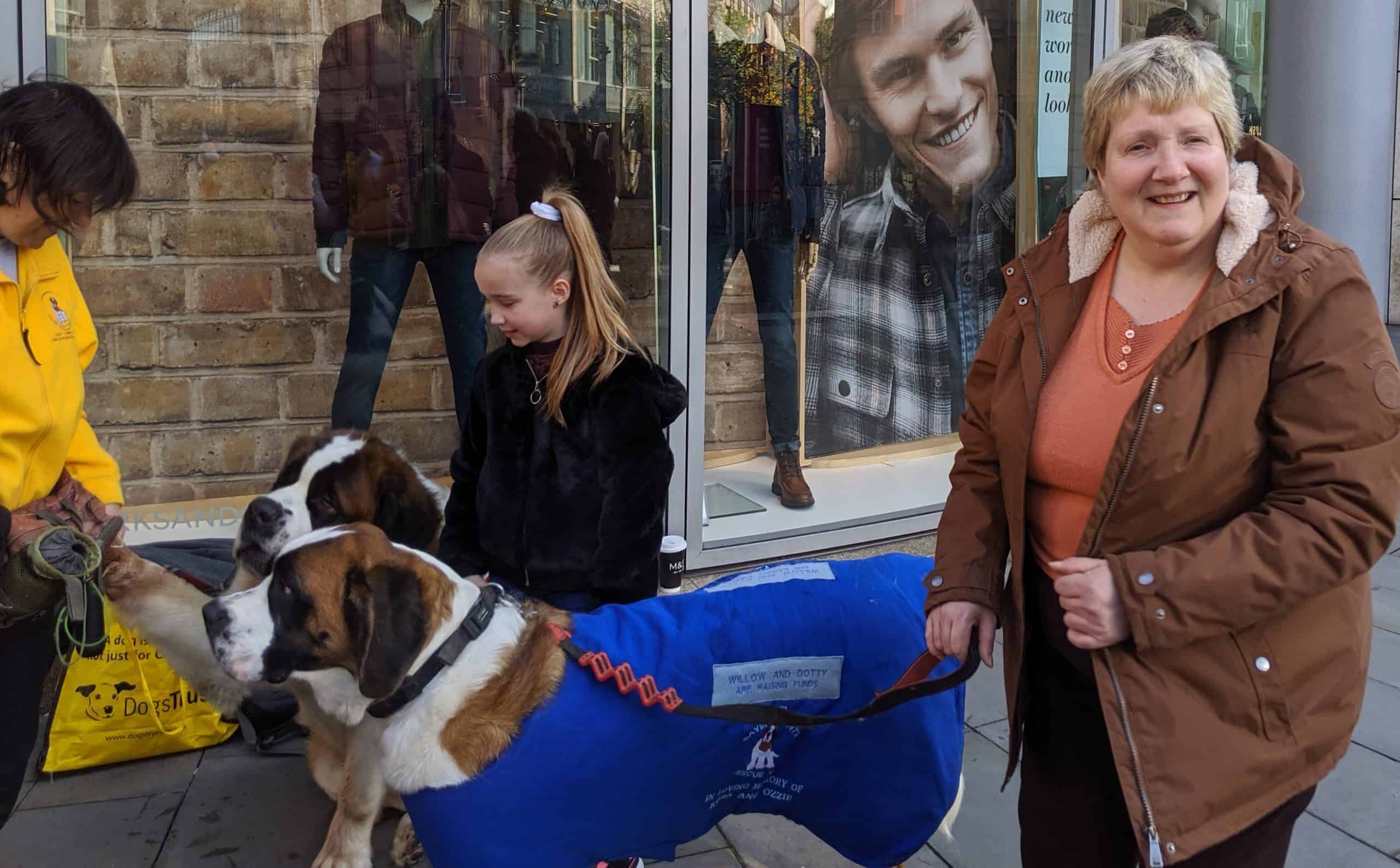 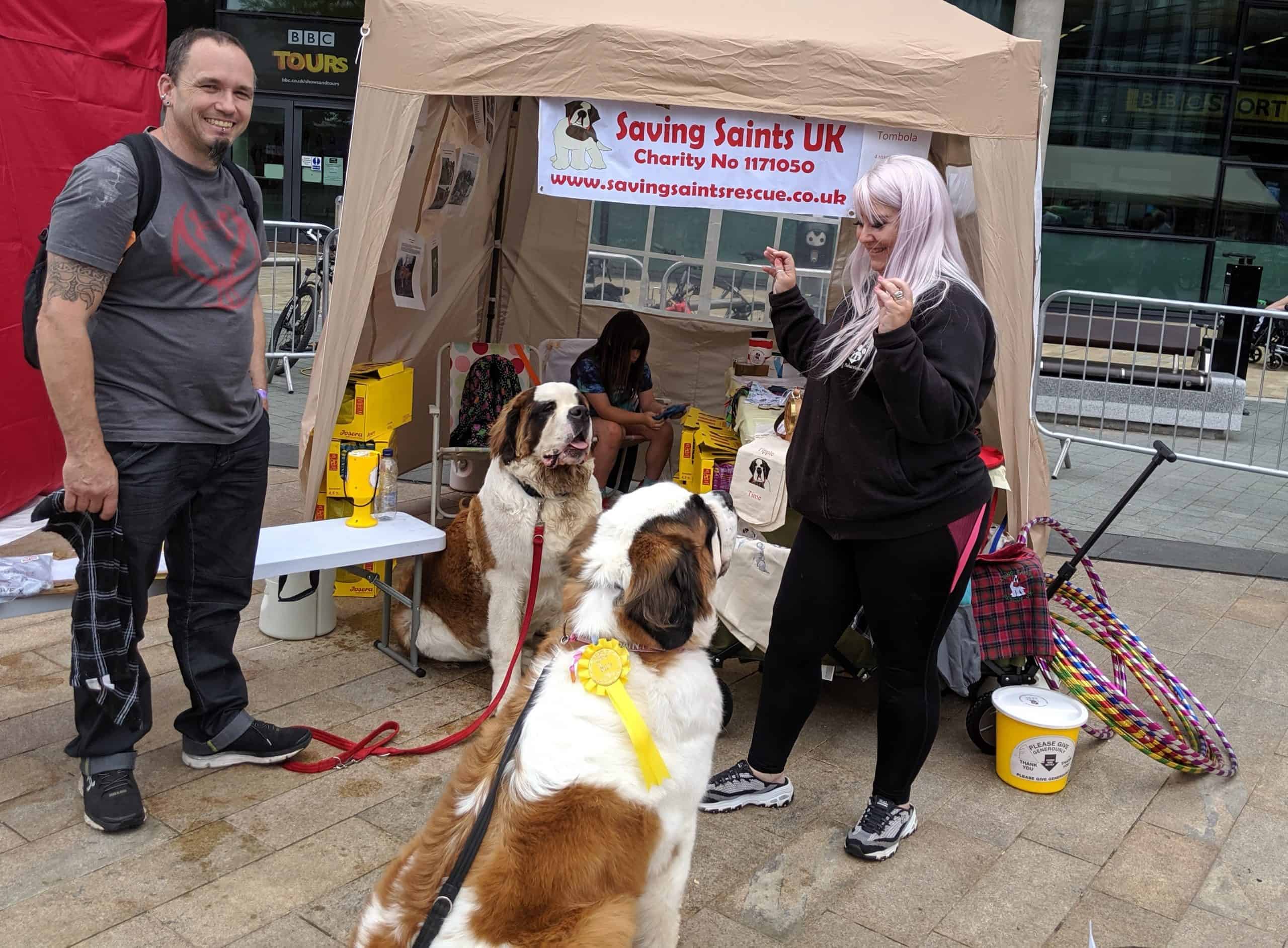 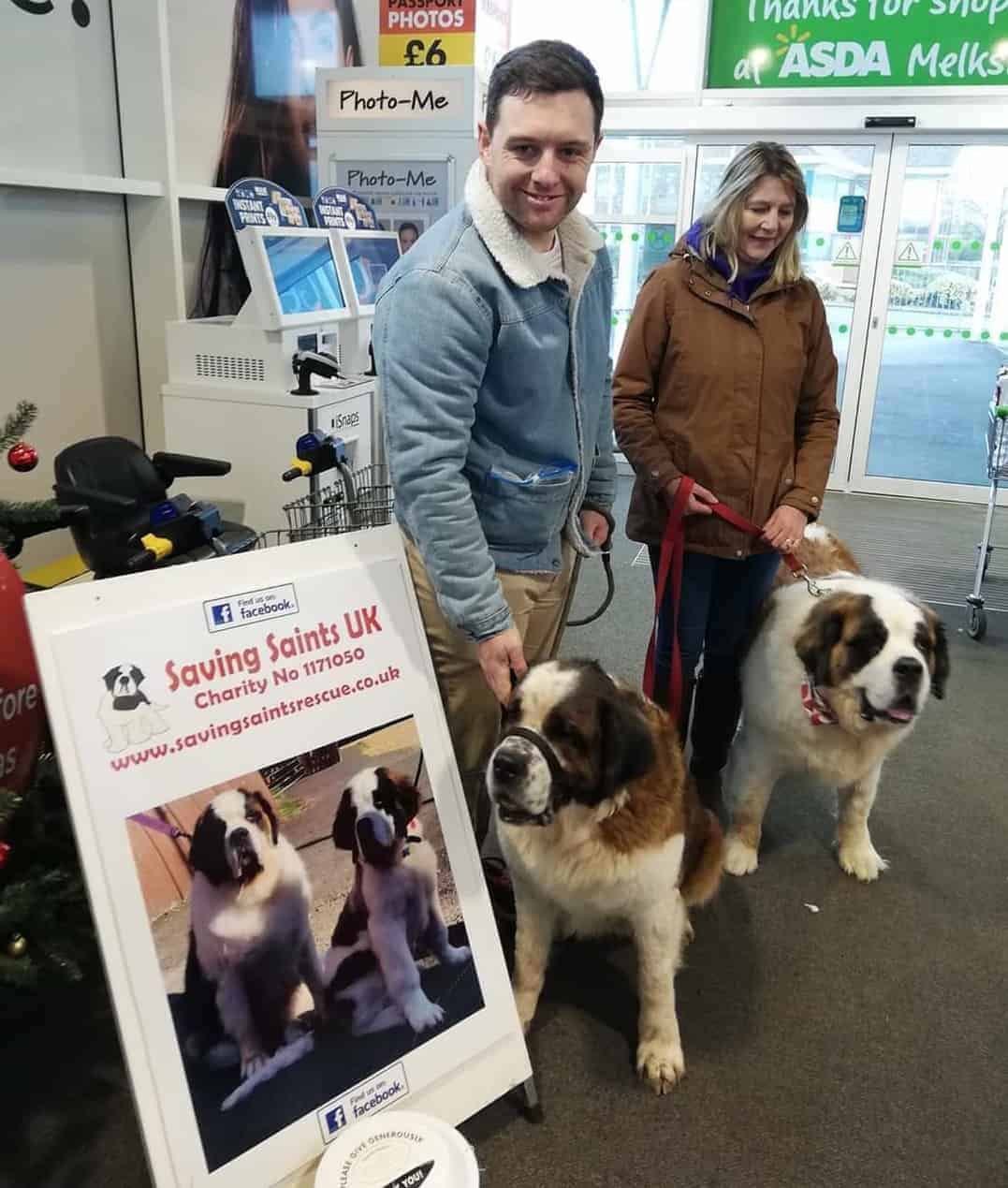 Help Us, Help Them!